TO JOIN A GROUP

Ski touring through the wild Taurus mountain range that rises up from Anatolia in the center of Turkey.

Going up through a canyon or in a lost valley, it is not rare to see a wolf, a lynx or a ibex because these mountains have kept an exceptional fauna.

In addition to the attraction of these massifs for ski touring, this trip is also an invitation to discover another people, since we share the roof, the life and the traditions of these mountain populations, which reserves us a welcome beyond all hope.

Every evening we taste a different dish prepared with great care by the lady of the house, inherited from the oldest culinary traditions of the region. We will end this Turkish odyssey with a detour in Cappadocia to discover its troglodyte villages carved out of volcanic ash from the Erciyes and Hasan rivers. 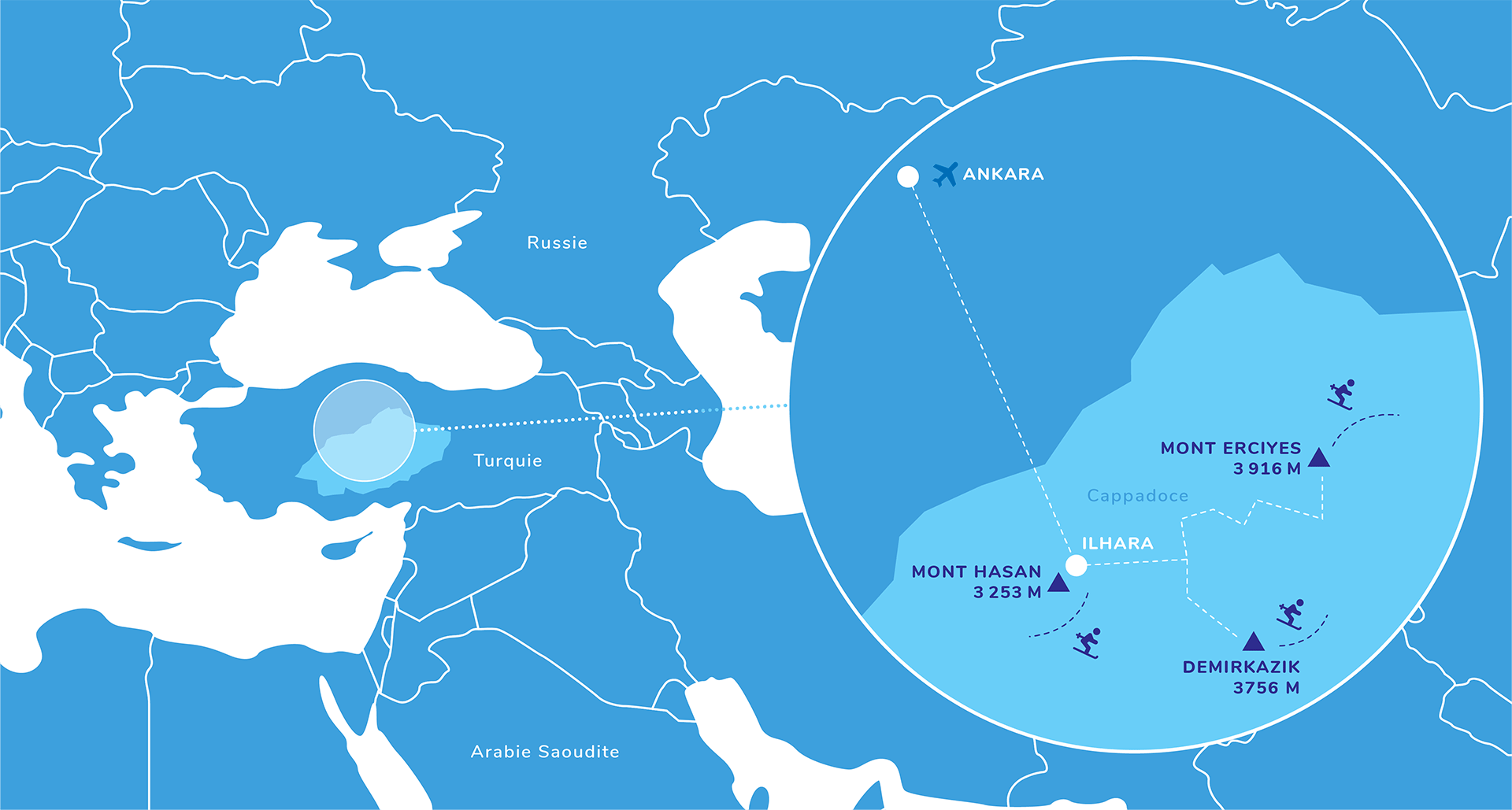 What you will do during your trip

You will ski the wild peaks of the Taurus Mountainsin Turkey.

Hosted with locals for 5 nights, sharing food and customs.

What is Ski Trekking?

What type of ski is required?

Are we going to ski touring?

What is my ski level? What do I need to pack for this trip

DAY 1: Arrival Ankara - Ihlara
Meet at Ankara airport and transfer to the hotel (reception time according to flight schedules). Transfer to Ihlara by private minibus (4 hours drive). On the way we visit the salt lake of Tuz Golu. Night in a family pension in Ihlara.

DAY 2: Mount Hasan - Taurus
Hasan Dag is one of the volcanoes that were active three million years ago and covered Cappadocia with their lava. Departure early in the morning for the ascent to the summit of Mount Hasan. At the top at 3268 mts high, we have a very nice view of Cappadocia and Anatolia. After a spectacular descent, our minibus takes us to the village of Çukurbag (2 hour transfer). Overnight at the inhabitant's home in this mountain village.

DAY 3: Mont Guzeller - Taurus
Early breakfast then transfer to Askam Pinari Valley. Easy 4-hour ascent to the summit of the Guzeller at 3461 mts high. Descent towards Askam Pinari and return to the village of Çukurbag. Dinner and accommodation in the village.

DAY 4: Mount Alaca - Taurus
Transfer to the Aksam Pinari valley. Ascent to Ayciveli pass at an altitude of 3400 mts. Then we continue along the southern flank to the summit of Mount Alaca at 3585 mts high. A superb descent along the large valley of Buyuk Mangirci to the Sarimehmetler plateau rewards our efforts. Back to Çukurbag village. Dinner and accommodation in the village.

DAY 5: Celik Pass - Mount Emler - Taurus
Morning breakfast, then transfer by 4x4, to go to the departure of the valley which gives access to the Yalak Deresi gorges at 1900 mts high. After a few fairy chimneys erected like sentinels, we enter the narrow gully surmounted by huge walls leading to the upper valley. Through fairly easy slopes, we will reach the Celik Buyduran Pinari Pass at 3450 mts high. From the pass, you can admire the plateau of the seven lakes, in this season covered with snow... From the pass there is the possibility to continue to the top of Emler Tepe at 3765 mts high. From the summit, the view leads to the Cappadocian volcanoes of Erciyes and Mount Hasan. Return on skis by the same itinerary and then to our B&B. Translated with www.DeepL.com/Translator (free version)

Day 6: Mont Eznevit - Taurus
Transfer to the starting point in Emli valley. 4 hour ascent to the summit of Mount Eznevit at 3472 mts high. Descent to Emli valley and back to Çukurbag village for dinner and accommodation.

DAY 7: Maden Gorge - Mount Kaletep - Taurus
Early in the morning, transfer to Maden gorge. Easy three hour ascent to the top of Mount Kaletepe at 3200mts high. The view is wonderful. Descent on long slopes in the west to Buldurus pass at an altitude of 1700 mts. Transfer to the village. In the afternoon transfer to Cappadocia for the night. On the way, we visit Derinkuyu, the underground city of the Paleo-Christian era, the largest in Turkey.

DAY 8: Mont Erciyes - Ankara
Early morning transfer to Mount Erciyes. 5 hours of ascent along the Seytanderesi valley. A magnificent view from the summit at 3916 mts above sea level. Descent and transfer (5 hours) to Ankara for the night in the hotel.

DAY 9: Ankara – Retour
After breakfast, transfer to the airport for the return flight.

NIGHTS AT THE INHABITANT: 5 nights with full board at the inhabitant

FAMILY PENSION: 1 night full board in a family pension.

HOTEL: 2 nights at the hotel with breakfast.

Full-time supervision by a UIAGM / IFMGA mountain guide or a fully qualified ski guide specialist of the region.

-5 nights in full board at the inhabitant.
-1 night full board in a family pension.
-2 nights in a comfortable hotel with breakfast in a double room.

We will provide you with a copious picnic, but do plan to bring some groceries (dried fruits, marzipan…), a snack will also be served at the end of each hike.

Transfers by private minibus and 4×4 in the Taurus Mountains.

You don't have the famous beacon, shovel, probe triptych? We can lend it to you. If you have your own safety equipment bring it!

Each guide will have all that is necessary for the safety of his group in his rucksack.

Compulsory for all trips. A good contract covers mountain rescue, transport to the nearest hospital and repatriation. Check your personal insurance contract which may include this risk.

Considering the costs incurred, this insurance is strongly recommended. A personal contract can be subscribed individually. The cancellation to be covered may be the cancellation of the stay or the refund of the remainder of the stay in the event of an interruption. Check your credit card policy. Payment by credit card, Visa Premier or Gold MasterCard, may provide cancellation insurance.

For this Turkish odyssey, the 9V guides use and recommend skis that are 85mm wide under the foot, equipped with light touring bindings, climbing lskins in good condition and ski crampons for hard snow.

Often group members will pool their money for wine at the dinner table.

All plane tickets are at your expense.

This trip takes place mainly at the inhabitant.

No guaranted trips yet, contact-us to set it up! 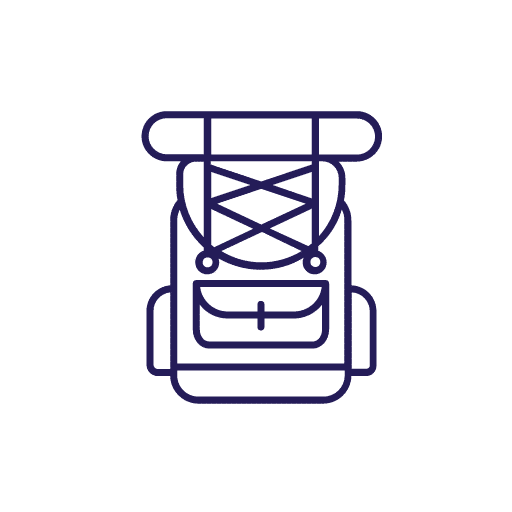 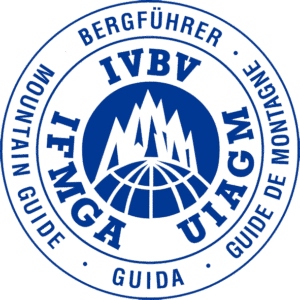